I really like the new Spending Summary, especially as its across all of my accounts, and the fact I got a Monday morning notification. What would make it even better is if I could click on the Merchants in the summary and see the transactions that make up the total.

And I’m confused by this Snoop - I think it’s telling me I’ve spent £125 at Voucher Codes, which I haven’t? 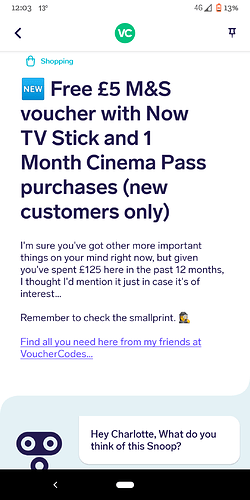 Hi Charlotte. Forgive us - this shouldn;t have appeared in your feed. It’s based on your spend at Now TV - but it makes no sense to serve a new customers offer to an existing Now TV customer. Snoop’s mortified and offered to be reprogrammed immediately, which I’ve taken advantage of. So it’s now disappeared from your and all other Now TV customers’ feeds! many thanks - Paul

@PaulL
The thing is Snoop, you know I’m already a Nationwide Current Account holder too… 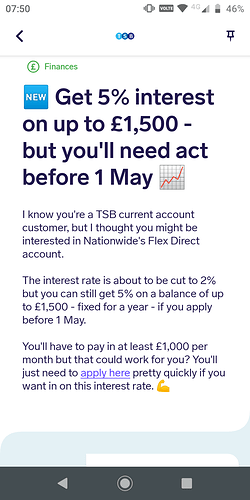 Good shout Richard - and you’re right we do. To explain why you still get the Snoop (today), it’s to do with the fact that the algorithm that powers Snoop is very good at spotting positive signals (Richard has a TSB account) but not yet good at spotting negative signals (Richard doesn’t already have a Nationwide account). We’d only want to serve the Snoop where we can see you have a TSB account, but don’t have a Nationwide account. That particular piece of logic is in development now. It’s not super-complicated but it’s a use case we’ve worked out we need more and more in recent weeks, hence why we’re developing now. So very soon, this type of situation should no longer be happening. Hope that makes sense - and thanks for all your support of Snoop. Paul L

Also @PaulL the Snoop is wrong.

Thanks Richard. That mistake is entirely mine when refreshing this Snoop last night. Thank you for pointing it out. I’ve corrected it and the Snoop has been updated. Thanks for pointing that out - genuinely I appreciate it. Many thanks 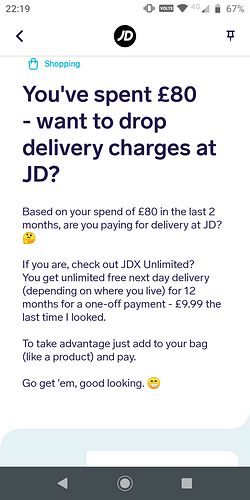 Seems to have occurred across a couple of Snoops and is since I attempted to re-connect my accounts.

Another piece of feedback for the weekly Spending Summary. My top spend is, unsurprisingly, for my monthly mortgage payments of which I have two transactions per month, and are both catgerised in the transactions as ‘Bills’. But in the spending summary they appear with the ‘General’ orange circles. Do you know why they’re different? 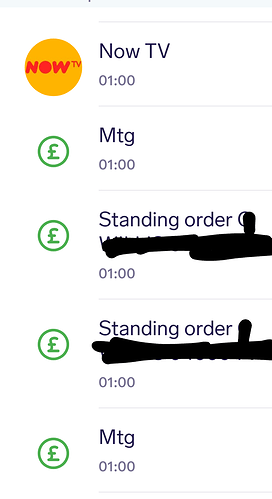 Also, finally, what’s with the 1.00 under each transaction in the transactions list?

PS it’s the same in the Monthly Spending Summary Snoop too - they also shows with the ‘General’ orange circles.

I’m not sure why they are showing as general as they should be showing the icon that corresponds to the category of the transactions - we’ll look into this today…thanks for brining it to our attention.

Will update you when we have a bit more info.

@charlwillis I think your transactions are from Nationwide and I can see they don’t provide us a useful transaction time.

So I’ve just switched off that time display for them. Does that look better now?

As Ross says we will get back to you on the category logo.

Yes, much better! Thanks!

I got a notification this morning saying that Snoop was ready to tell me my weekly summary. But no such Snoop exists when I go into the app?

In amazing news though, my Pinned Snoops have moved to Pinned and have gone from Latest! Hooray! This is HUGE and I’ve been waiting for this since day one. Great work team!

but are working to get it fixed and into everyone’s feed ASAP!

Unfortunately we haven’t made the change to stop showings pinned snoops in your latest feed, I suspect they are just a bit further down the list.

Put the champagne back on ice and we’ll celebrate together when this is done.

Hmmm, that’s very odd. Because they’re definitely not on the Latest screen. I’ve scrolled all the way to the bottom and they’re only appearing on the Pinned Screen??

I spoke too soon! They were 100% only on the Pinned Screen. Then I closed the app and reopened it, and now they’re back on the Latest Screen too…

More transactions showing in the weekly spend summary as ‘General’ category when in the regular transactions list they’re actually categorised correctly. (PlusNet as ‘Finances’ and MedicAlert as ‘Charity’).

I won’t keep posting these. Just wanted to demonstrate it wasn’t a one off or just with that one previous merchant/transaction. 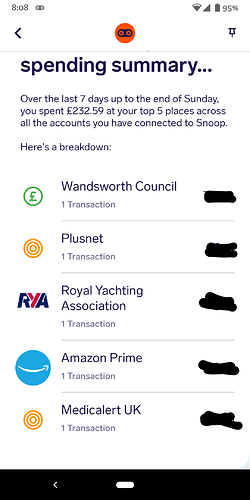